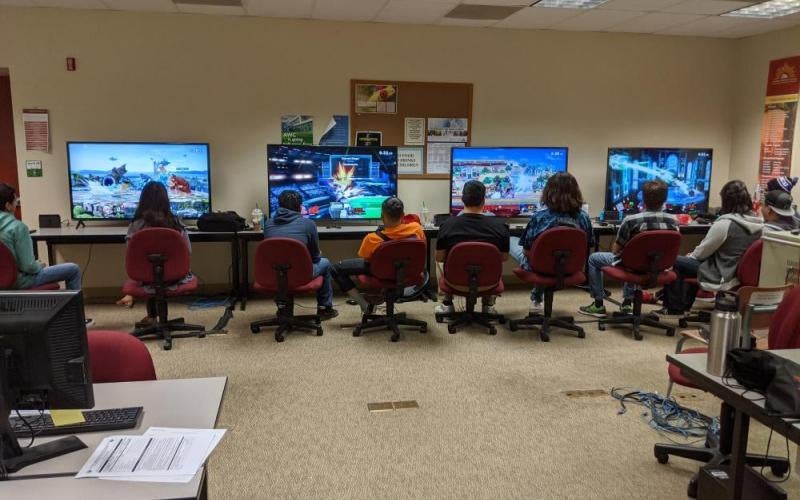 Yuma, AZ (March 5, 2020) – Arizona Western College is venturing into new territory with the establishment of an esports program.

“We began a club in the fall with only a few days advanced notice to put together a Super Smash Bros. Ultimate team of four players and we actually had one player make the post season,” said esports coach AJ Buchtel, who also works as an AWC Cloud Services Architect.

In addition to engaging students competitively, Buchtel noticed that the program has also motivated students to make schooling more of a priority, as only full-time students are eligible to play on competitive teams.

“This semester, by word of mouth only, we grew the team to 10 players. Three of those players were part-time students that are now full-time students just for the opportunity to play Super Smash Bros. Ultimate competitively,” he said.

Buchtel shared that they plan to start recruiting prospective students and holding tryouts for two Overwatch teams that will play in the league this fall as the program becomes fully recognized by the NJCAA. They will announce the date for tryouts later this semester as they are still in the process of obtaining additional equipment.

College and high school age students who are interested in being a part of the club can visit practices on Fridays at 10 a.m. in room BA 101 in the Business Administration building on the Yuma Campus, 2020 S. Avenue 8E. Those considering joining will be given an interest form and will have an opportunity to join the group’s Discord server. While only full-time students are eligible to qualify as team members, the club is open to everyone who would like to participate.

“I am always so proud of AWC's ability to look at all things progressively and to take chances. When I was first approached to help with this project I honestly struggled, because my initial thought was that gaming could never be considered a sport. However, the more I watch the students allow it to be their passion for attending school and being successful, the more I support it and even get excited for the future of the program,” said Shara Skinner, AWC Coordinator of Student Leadership and Activities.

“In 2020, AWC is redefining the activities and programs that will take us into the future of meaningful education. Our administration has been integral in making this happen for our students and I really consider our students lucky for being at AWC during a time of growth, positive change and strategic planning for the future of the school and the community.”