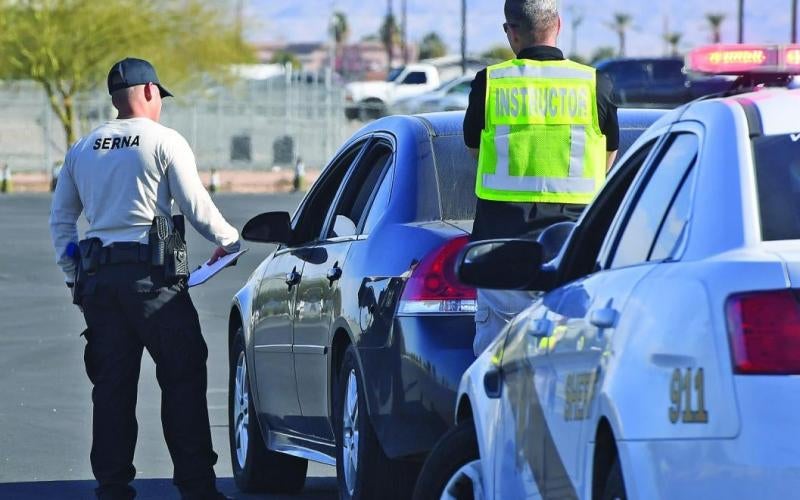 “Today’s investment is a major step to supporting those who are dedicated to protecting Arizona and strengthening our state’s law enforcement strategy in a border community,” said Governor Ducey. “By increasing the capacity at this advanced training facility in Southern Arizona, statewide law enforcement personnel will have the unique opportunity to learn about the challenges of protecting Arizonans in border communities and across the state.”

“Once again, the strength of state and local area partnerships among Governor Ducey, Yuma County law enforcement agencies and Arizona Western College has achieved new heights,” said Yuma County Sheriff Leon Wilmot. “By simply working together towards a common goal the vision of a local new, expanded and modern basic training academy for much needed certified peace officers is a reality. What an outstanding achievement by all involved and a public safety benefit to the Yuma County community for years to come.”

Arizona Western College began training cadets in 1984 and has graduated more than 400 certified peace officers. Until 2019, cadets trained in conjunction with the academic calendar and took a full academic year to graduate. To accelerate training and create more opportunities, Arizona Western College created a full-time academy that would prepare and train officers in 20 weeks. The academy trains more than 60 cadets a year and works with 15 agencies across the region.

As border crossings escalate to record levels and the Biden administration continues not to take action, Governor Ducey has prioritized border security in Arizona. Increasing law enforcement presence and personnel in our state is vital to public safety. The new facility and expansion of the training academy will benefit public safety across Arizona and the nation for years to come.

“Yuma County is pleased to be able to facilitate this funding solution for AWC’s regional Training Academy,” said Tony Reyes, chairman of the Yuma County Board of Supervisors. “This is more than a training academy, it is an example of key organizations coming together for the betterment of everyone and we are excited to be a part of it.”

MORE on how Governor Ducey has prioritized border security HERE.

On March 19, Governor Ducey traveled to Douglas, Arizona to get a first-hand view of the security and humanitarian situation at the U.S.-Mexico border. After taking an aerial border tour, the Governor received a briefing and held a press conference and a border security roundtable.

On April 20, Governor Ducey issued a Declaration of Emergency and deployed the Arizona National Guard to the southern border to support local law enforcement efforts as the nation experiences a rapid increase in apprehensions and migrant children in federal custody.

The day after issuing the Declaration of Emergency, Governor Ducey toured Arizona’s border in Yuma and received a briefing on the escalating humanitarian and security crisis from Border Patrol, local law enforcement and community leaders.

On June 30, the Arizona Legislature passed and Governor Ducey signed the FY 2022 budget, which included $25 million in state funding for the National Guard border mission and $30 million to assist law enforcement with border security operations, in addition to existing funding for the Border Strike Force.